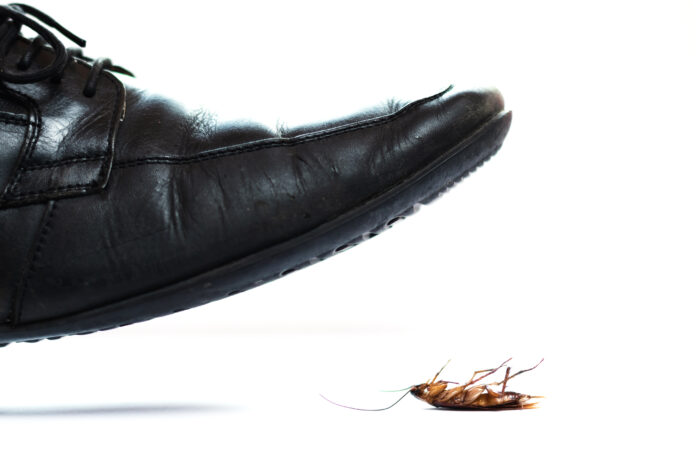 Mr. Cockroach was walking across the kitchen floor after munching on a juicy scrap of food, carelessly dropped upon the floor. He was feeling quite good as he continued his trek to another crevice in the kitchen, boldly ambling across the floor very early in the morning.  He didn’t expect that Mr. Owner of the house was already up and getting his coffee.  Splat went Mr. Cockroach under Mr. Owner’s bedroom slipper.

As with Mr. Cockroach, some dealers are oblivious as to what can happen to them should they not recognize their environment.  The environment for dealers includes the steep wall of compliance challenges and the risks of being prosecuted and sued.

Over the years, I have discussed dealer compliance with many dealers, when I worked for the Florida Attorney General’s Office, and had dealers make these assertions to me directly:

The foolishness of these comments speaks for itself.  These remarks sound as though a cockroach uttered them.

The CFPB and DOJ

The Consumer Financial Protection Bureau (CFPB) is an agency with a budget in excess of half a billion dollars and over 1,500 employees.  Its jurisdiction includes banks, credit unions, securities firms, and other financial companies. The CFPB has enormous power, resources, and responsibilities.  It selects its targets carefully and for strategic purposes. It has direct jurisdiction over most independent dealers and all BHPH dealers.

The United States Department of Justice (DOJ) dwarfs the CFPB in size. The DOJ has an annual budget of almost $30,000,000,000 and 113,000 employees.  It is, indeed, a large federal agency with wide-ranging jurisdiction. It has jurisdiction over all dealers, franchise, independent, and BHPH.

It is estimated by the National Independent Automobile Dealers Association (NIADA) that there are over 10,000 BHPH dealers.  Some of these dealers may retail only a few vehicles per month.  Modestly sized BHPH dealers have been prosecuted by these agencies over the years along with Fortune 500 corporations. Franchise and other independent dealers have all felt the regulatory and prosecutorial wrath of these agencies.

Here is the question a cockroach would certainly not ask but a dealer should:

How would such colossi of government agencies even notice such dealerships, let alone prosecute them?

The answer is evident in these example cases.

In the past year, the DOJ settled a case where it sent undercover shoppers to ascertain whether a small BHPH dealer was engaging in discrimination against black customers.  The DOJ concluded that it had.  Discrimination was alleged and the dealership was required to adopt Fair Lending policies that standardize down payments and other terms, conduct training, keep records, and submit reports.  This case is important, as one must consider that, a major government agency investigated a small BHPH dealer regarding the issue of discrimination.  This case is a foreshadowing of the future Biden-Harris regulatory course of actions. Discrimination is a continuing key issue for prosecution by federal agencies.

The CFPB and Herbies Auto Sales

The CFPB took action against Herbies Auto Sales several years ago for abusive financing practices.  Evidently, the store misled consumers and hid financing charges. Restitution of $700,000 and a civil penalty of $100,000 had to be paid.  The store was required to cease and desist its deceptive practices and provide all the legally mandated disclosures.  (The phrase “cease and desist” is legal speak for “stop doing it” and “never do it again.”)  The purchase price of the vehicles for sale was to be prominently disclosed. Finally, consumers were to sign an acknowledgement confirming they received all the required information before or at the time of receiving a financing offer.

In addition to the DOJ and CFPB, all these other legal entities see dealers as an enormous target for prosecutions and lawsuits.  Agencies monitor one another and will emulate one another’s actions.  Should the FTC pursue a line of investigations so will the states’ attorneys general.  It is a form of legal contagion.

All dealers of every stripe should be on notice that they can’t presume that they are immune from being the subject of prosecutions and lawsuits because of their size, location, or past history. Every so often, the IRS audits and prosecutes a lower income taxpayer to set an example.  The same line of reasoning applies to other governmental agencies.  Many, and various, types of dealers are caught in the scopes of government agencies for sundry reasons.  The principal reasons for these prosecutions are consumer complaints and advertising.  Suspicions and complaints regarding discrimination will certainly trigger investigations as indicated above.

The most obvious remedy for these risks is to have a comprehensive compliance program such as a compliance management system. Two major components of such a system it to appoint a compliance officer and have a protocol to address consumer complaints.  No complaint from a member of the public should ever be ignored.  Dealers need to respond to them before they ever come to the attention of a regulator.

The other remedy is to be prepared for the allegations of discrimination.

Two programs offered by the NADA address these Fair Lending and discrimination issues quite effectively and should either be implemented or serve as a template: Fair Credit Compliance Policy and Program and Voluntary Protection Products: A Model Dealership Policy. These two programs would provide compelling defenses to regulator investigations. Such protocols should be standards in every dealer.

Dealers need to be aware of their business environments in order to avoid the cockroach experience.